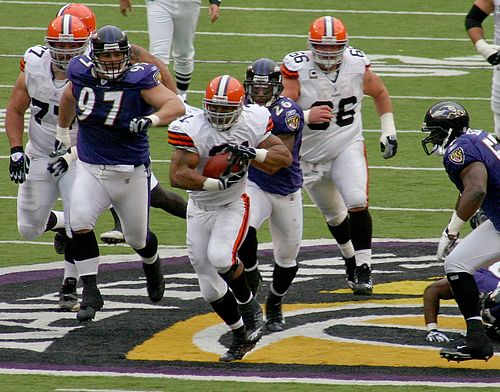 CLEVELAND — It’s hard to believe that an entire decade has passed since the magical 2007 Cleveland Browns season, when players like Derek Anderson, Jamal Lewis and Braylon Edwards led the team to the brink of a playoff berth.

“For a team that has averaged 4.2 wins per season since that year, it’s only right that the incredible 2007 season is properly recognized,” Browns owner Jimmy Haslam said. “It was a proud, proud year when that dream team won 10 games. I’m not sure we’ve won that many in the entire time I’ve been here.”

The celebration is set to be held at halftime of the Browns’ Week 7 game against Tennessee on Oct. 22 in order to coincide with former head coach Romeo Crennel’s bye week. All players, along with then-general manager Phil Savage, are invited to be recognized on the field.

“People will still come up to me and thank me for helping us have such a magical ride,” said offensive lineman Joe Thomas, a Pro-Bowler in ‘07 and the last remaining Browns player from that team.

Along with the halftime ceremony, the Browns plan to host a Jim Sorgi dunk tank, with proceeds going to charity. Sorgi, who needed to lead a Colts team resting most of its starters in Week 17 to victory in order to clinch a playoff spot for Cleveland, played like he was a third-string middle school quarterback during the loss.

The 2007 team, often referred to as the glory days of the Browns since their return in 1999, rode a high-octane offense and absolutely no defense to a very good season that has not been close to replicated since. The team did, true to Browns form, choke away a playoff spot against a last-place Bengals team in Week 16, but that wouldn’t have mattered if referee Jerome Boger knew that force-outs counted as catches back then against the Cardinals in Week 13.