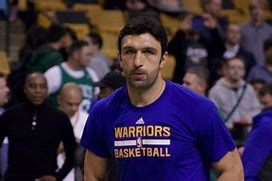 Oakland– Zaza Pachulia came into Saturday’s game against the Thunder with quite the track record of “interesting” plays and he added one to the legend.  During the game he saw Russell Westbrook on the ground and was pushed over onto Westbrook’s legs by Manti Teo’s girlfriend.  This attempt to injure Westbrook instantly brought back memories of last May when Zaza injured Kawhi Leonard by putting his foot below the jump shooting Kawhi.

Naturally many are accusing Zaza of being a dirty player but Pachulia fired back when the media pressed him on the subject.  “This notion that I am a dirty player is false,” said the Georgian big man.  “I simply go out there, play basketball, and try to injure players on the opposing team.”

These strong words from Zaza are sure to potentially generate even more controversy around him. After the game many were wondering why the defending champions with two former MVP’s have to resort to trying to injure players and to that no answer was found.