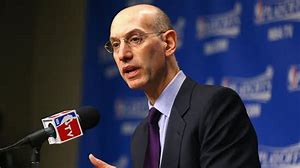 NEW YORK — The NBA has had a conference crisis for many years, with the Western Conference  consistently having much more talent than the East. After LeBron James’ move to the Los Angeles Lakers, the gap has become more extreme than ever, with all active MVPs in the West.

The day after James’ move, DeMarcus Cousins shocked the NBA world by signing with the Golden State Warriors, which finally convinced NBA Commissioner Adam Silver to take action regarding the playoff format.

“We will be changing the playoff format to no longer include conferences,” said the commissioner. “It will also include only one team: the Golden State Warriors.”

Many fans expected a change to the playoff structure, but this may not be the way they thought it would end up. When reached for comment, many current players said they were OK with this format, as they can avoid wasting their time attempting to win a series against the Warriors. Golden State forward Draymond Green did mention that if the Warriors should lose any regular season games, he will be recruiting Anthony Davis next season with a tearful plea over the phone.