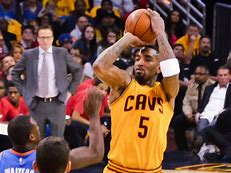 CLEVELAND–  After almost two full seasons of sub-par play, Ty Lue finally made the move to bench J.R. Smith on Tuesday against the Suns.  Although the move was not surprising to many, there was controversy over the method of letting J.R. Smith know.  Cavs coach Tyronn Lue claimed that he let J.R. Smith know in person, but J.R. said he was only texted about it.  Now the day after the details have surfaced of what really happened.

Sources have told Clemocks.com that Ty Lue originally planned to tell J.R. Smith of his benching over lunch, but changed his mind and simply sent him a text.  The source said Lue had a last minute change of plans when he saw the buffett prepared for the Cavs after their shootaround in Phoenix, which included salad and steaming hot chicken tortilla soup.

It appears J.R. Smith did not react well to the text, but there are many who don’t blame Tyronn Lue for his decision.  When asked for comment Cavs shooting coach Damon Jones supported the Cavs head coach and said he has been texting J.R. more than ever about his performances in games.